Plastic microfibers found in the heart of the Himalayas

At the foot of the holy Langju Glacier, at nearly 6.5 kilometers altitude, at the very heart of the Himalayas, a blue plastic microfiber was found. The fiber was found in a water sample taken from the mountain by a team from Vertical Nepal in October 2016.

The government of Nepal recently opened the holy Langju Himal area to the public. Vertical Nepal, an expedition led by the Arctic explorer Lonnie Durpre, used the occasion to collect water samples for the Adventure Scientists’ Global Microplastics Initiative. The Adventure Scientists are collecting as much data as possible on microplastics and plan to use the data to stop microplastic leakage into the environment. 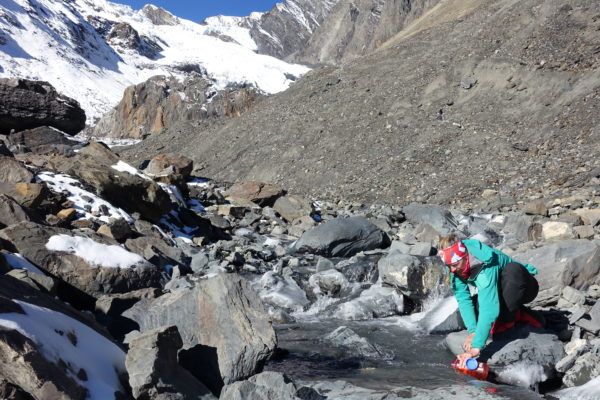 The newly explored area has never been visited by people before. The expedition team was then very surprised that the water sample contained plastic. How the plastic fiber got there is still a mystery. One of the Adventure Scientists’ theories is that plastic fibers were carried to the mountain on the wind. This would explain why plastic was found in places where people have never been.

According to researchers at King’s College London, the current methods of testing air pollution needs to be adapted to include microplastics. In Paris, the fallout from microfibers was measured for the first time last year. For one year, the microfibers that floated down in the air were counted in two locations – in Paris itself and in a town just outside Paris. The fibers, some of which were plastic, land on land or in water and then flow out to sea. They ultimately become part of the plastic soup.